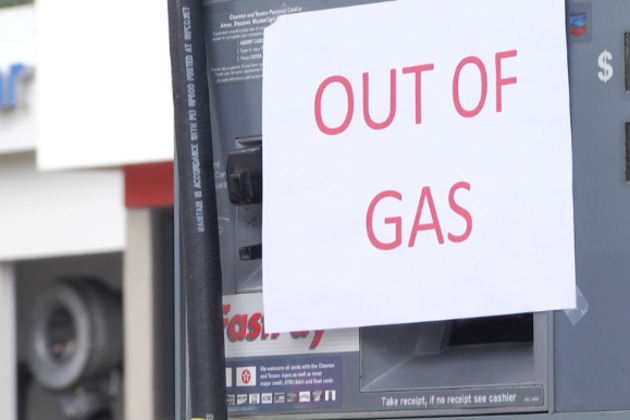 FLORIDA, U.S. - As drivers rushed to escape the impending Hurricane Irma, gasoline stations in Florida reported running out of fuel.

All day long, drivers in various parts of the state scrambled to fill their tanks and get out of town as Hurricane Irma barrels toward the state - leading to a serious obstacle for the rest - gasoline shortages.

Hurricane Irma's uncertain path has led several of the 20.6 million residents in Florida to stock up on fuel in case the storm's 180-mile-per-hour winds came their way.

According to estimates released by crowdsourcing platform GasBuddy, at least 40 percent of gas stations in the Miami-Fort Lauderdale region are now without fuel.

It said that about one-third of the gas stations in the West Palm Beach and the Fort Myers-Naples regions are suffering shortages too.

GasBuddy numbers also showed that central population centers like Tampa are also being affected, as well as the northern Gainesville region.

James Miller, director of communications for the Florida Petroleum Marketers and Convenience Store Association said, "You had people literally in every county assuming it was going to hit them. As a result, you have shortages in areas that desperately need it. It's hard to blame people because the storm is quite scary."

With refineries being disrupted by Hurricane Harvey merely a week back, and now the huge demand from residents fleeing highly-populated region - the shortages have hit the nation's energy infrastructure hard.

Florida relies on the Gulf Coast refineries for gasoline shipments that were disrupted by Hurricane Harvey - exacerbating the problem.

According to S&P Global Platts, while some refineries shut down by Harvey are resuming operations, roughly 12 percent of total U.S. refining capacity is still offline.

Meanwhile, Miller also warned that Florida gets 97 percent of its gasoline from waterways - and Hurricane Irma is likely to shut down key ports very soon.

Further, Tom Kloza, chief oil analyst at the Oil Price Information Service said, "It's like the church on Easter Sunday getting a tornado warning."

Kloza predicted that gas shortages will worsen in the coming days as the massive Category 5 storm leads to more "panic buying" and gasoline deliveries are blocked by Florida port shutdowns.

Meanwhile, Florida Governor Rick Scott pleaded with residents not to consume more gasoline than they need.

In a statement on Wednesday, Scott said, "Be considerate of neighbors and take only what each family needs to be prepared."

State officials also assured that Florida is moving as much fuel through the system as possible.

Further, the state is also said to be working to have additional fuel supply on standby for future deliveries.

Patrick DeHaan, senior petroleum analyst at GasBuddy warned, "Motorists are consuming everything that is being delivered. Supply could be very touch and go."

The other side of the problem, AAA highlighted was that on Thursday, a gallon of gasoline was being sold for $2.72 in Florida, compared with $2.40 a week ago.

Nationwide, prices at the pump continue to rise too, with the national average increasing to a fresh two-year high of $2.667, up 32.8 cents from a week ago.

The Category 5 Hurricane Irma is one of the most powerful storms ever recorded in the Atlantic Ocean, and heavily populated areas of eastern Florida could be in its path.