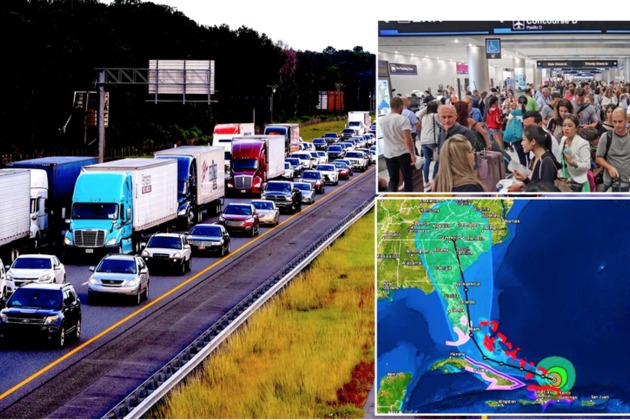 FLORIDA, U.S. - In what is expected to turn into one of the largest evacuations in U.S. history, the dramatic mass exodus from South Florida began on Friday morning, as Hurricane Irma threatened to swamp low-lying islands of the Bahamas.

Meteorologist have said that a possible 20-foot storm surge is expected as the massive storm moves towards Florida, with the potential to ravage the state.

On Friday morning, anxious residents of the Miami area and the Florida Keys headed north in packed vehicles to dodge Hurricane Irma as the deadly Category 4 storm took aim at the state's eastern coast.

According to officials, several of the 6 million people combined, who call Miami-Dade, Broward and Palm Beach counties their home were rushing out in fear to avoid the hurricane's path.

Despite reports of several clogged roads, thousands of motorists braved the slowdowns and backups and took to the roads, even as some drivers were forced to wait for hours at gas stations, some of which ran out of fuel almost immediately.

Officials said early in the day that the Florida Highway Patrol escorted fuel tankers so they could reach and resupply gas stations.

Troopers too monitored roadways to help after fender-benders and with disabled cars and trucks.

Further, on Thursday evening, the Federal Aviation Administration said that the scramble to leave Miami was so acute Thursday evening that air traffic controllers increased the space between flights from Miami and nearby Fort Lauderdale to enable them to better manage the crowded skies.

Several thousands of Floridians meanwhile tried to fly out of town, in a bid to avoid the chaos on the highways.

To help those trying to evacuate, Delta Air Lines said that it added additional flights out of Miami, Fort Lauderdale and Key West to Atlanta, which is its largest hub.

The airline added that it allowed passengers affected by Irma to rebook flights for free.

By Friday afternoon, American Airlines planned to wind down operations at its Miami hub, as well as in other south Florida cities, then to cancel flights throughout the weekend.

Officials said that Irma's impending landfall had forced airlines serving some of the nation's largest airports to plan to shut down operations.

In a news conference late on Thursday, Gov. Rick Scott reiterated that people should get out now.

He said that if people wait until Saturday or Sunday, when high winds and rain are expected to lash South Florida, it will be too late.

Scott added, "We cannot save you when the storm starts. So, if you are in an evacuation zone and you need help, you need to tell us now."

Scott added that by Thursday, in Monroe County, home to the Florida Keys, more than 30,000 people - only less than half the population had evacuated.

Further, the County Administrator Roman Gastesi said that all hospitals would be closed and ambulances, including air transports, would be gone by Friday morning.

He added, "You might as well leave now, while you have a chance, because when you dial 911, you will not get an answer."

The Florida Department of Transportation reported that extremely heavy traffic was reported on Thursday, including about 4,000 vehicles per hour on I-75 northbound in Lake City, compared with a norm of 1,000 per hour.

Governors of Georgia and South Caroline have ordered mandatory evacuations of low-lying coastal areas around Savannah and Charleston, even though forecasters do not know exactly where Irma will make landfall.

Forecasters meanwhile have said Irma will be near South Florida by Sunday morning and could potentially make landfall somewhere there.

It is predicted to churn ashore in the wide band between the densely populated Atlantic coast and the 100-mile string of islands from Key Largo to Key West before veering to the north through the state, on toward more population centers up the Eastern Seaboard.

He said Irma was "a threat that is going to devastate the United States, either Florida or some of the southeastern states," and he urged people from Alabama to North Carolina to monitor and prepare for the storm.

The National Hurricane Center said that Irma's maximum sustained winds were near 150 mph and that it was expected "to remain a powerful Category 4 hurricane as it approaches Florida."

Meanwhile, the hurricane center said that Hurricane Jose is now packing winds of 125 mph as a Category 3 storm, was expected to bring up to 10 inches of rain and "life-threatening flooding" to islands already left reeling by Irma, including Barbuda to Anguilla.