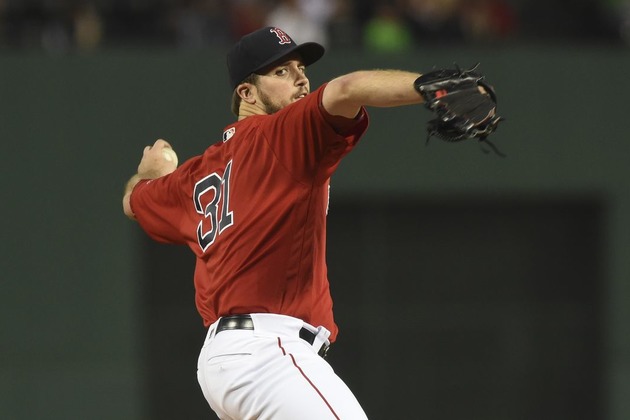 BOSTON -- Drew Pomeranz won his 15th game and Mookie Betts hit his first home run in over a month to power the Boston Red Sox to their third straight win, a 9-3 victory over the Tampa Bay Rays on Friday night.

Pomeranz (15-5) didn't allow a hit through the first 4 1/3 innings before a single by Brad Miller and a two-run homer by Jesus Sucre cut into an 8-0 lead already built by the home team.

Those were the only two hits allowed by Pomeranz through six innings. He struck out seven and has lost only once since June 11, going 9-1 in that span.

The 15 wins tie him with three others (including teammate Chris Sale) for the American League lead.

Betts hit his first homer since Aug. 3 (121 at-bats) with two on before loser Chris Archer (9-9, 2-12 lifetime against Boston) could get an out. The Red Sox broke the game open and chased Archer with five runs in the fourth.

The loss dealt a blow to the Rays' wild card chances. They came in 3 1/2 games out of the second wild-card spot but had three teams in front of them and are dealing with the stress of what is going on with the impending hurricane in Florida.

The Red Sox, who have won three straight, entered the game 3 1/2 games ahead of the New York Yankees atop the American League East.

The Rays lost right fielder Steven Souza Jr. in the fourth inning with a bruised left knee after he crashed into a side wall down the right field line.

He trapped a single by Vazquez as he ran toward the line. With the ball in his glove it appeared he hit the side barrier hard with both knees.

Souza was able to spin and throw the ball back in but was then on his back on the ground for several minutes as they tended to him. Souza was able to get up with help and left the field, walking slowly with assistance.

The Red Sox scored three runs before Archer got an out as Dustin Pedroia singled, Benintendi doubled him to third and Betts lined his homer just inside the Pesky Pole in right field.

It was Betts' 12th hit and his fourth homer in 30 career at-bat against the right-hander.

Archer failed to get an out in the fourth and was gone, with an error by first baseman Logan Morrison helping the five-run cause.

Pomeranz gave up his first hit in the fifth, and Sucre followed Brad Miller's one-out single with his home run -- his fourth and fifth RBIs in last two games at Fenway Park.

Miller came in 9-for-18 lifetime against Pomeranz, who hit him with a pitch his first time up.

NOTES: The Rays have had their three-game series against the Yankees -- Monday-Wednesday -- shifted to the Mets' Citi Field, where Tampa Bay will be the home team. ... This is the second straight season the Rays have been in Boston while a hurricane hit Florida. ... Boston manager John Farrell said the club's Jet Blue Park in Fort Myers is closed to baseball and will be used as a first responder headquarters. ... Red Sox INF Eduardo Nunez rested with back spasms but should return Saturday. ... LHP David Price, on the disabled list with elbow trouble, will throw a short simulated game Saturday at Fenway Park. ... Red Sox broadcaster Jerry Remy returned to the NESN booth after undergoing chemotherapy ... Rehabbing Rays RHPs Nathan Eovaldi (Tommy John surgery) and Xavier Cedeno (forearm) will start in the playoffs for Double-A Montgomery. ... RHP Matt Andriese takes on Boston LHP/ace Chris Sale in the second game of the series Saturday night. Sale is 3-1 against the Rays this season. ... The Rays will then start Alex Cobb in Sunday's finale.