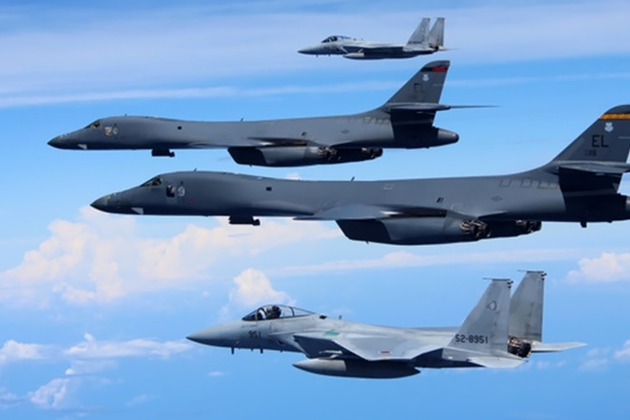 TOKYO, Japan - As South Korea braces for a possible new missile test by the North, on Saturday, Japan and U.S. conducted a military exercise over the East China Sea.

The bombers were joined by two Japanese F-15 jet fighters.

Following a series of North Korean missile and nuclear tests, including one which passed over its territory, Japan has been on high alert and has been closely coordinating with its allies.

For the second time in its history, on Thursday, Japan carried out a series of anti-missile drills at a U.S. airbase in the northern Tohoku region.

The tests came amid mounting tensions on the Korean peninsula and the increasing threat Japan faces.

According to reports, a crew of 30 set up a Patriot Advanced Capability-3 (PAC-3) missile interceptor system that is capable of intercepting short- and medium-range missiles at Misawa Air Base, Aomori Prefecture.

Japan said that the aim of the exercise was to boost U.S.-Japanese cooperation, and to prepare the military for any potential attack by North Korea.

The installation has been met with protests not only from the local South Korean population but also from both Russia and China, which believe the advanced sensors can peer into their territories.

After the completion of further installation of THAAD parts on Thursday, violent clashes broke out between police and protesters in the South Korean province of Gyeongsangbuk.

Locals fear that the THAAD deployment will make them a target of the North Korean government.

Intensifying tensions further, the U.S. has been holding joint military drills with South Korea in the region, further irking North Korea, that has described the annual U.S.-South Korea military drills as the "most explicit expression of hostility," voicing fears that the war games may "evolve into actual fighting."

China and Russia have urged all sides to use diplomacy to resolve the situation.