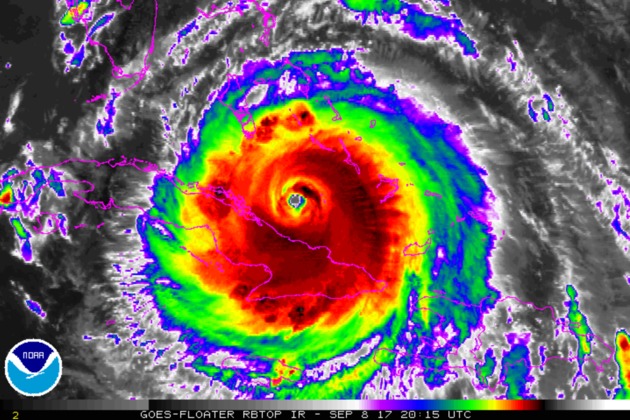 FLORIDA, U.S. - As Hurricane Irma hits its peak, the large and extremely powerful storm is sweeping toward Florida, bringing with it, strong winds that began lashing the southern peninsula on Saturday.

Forecasters have said that Irma could be one of the worst hurricanes in the state's history and on Saturday, computer model forecasts suggested the vicious storm is likely to ride up Florida's west coast.

It is set to strike the region with destructive winds and a devastating storm surge from the Florida Keys through Naples and Fort Myers and up the coast to Tampa.

After days of warning and close studies of its path so far, forecasters are still unclear where exactly the storm will make landfall.

However, weather forecasters said that winds well in excess of 100 mph could batter numerous areas along Florida's west coast.

Further, they said coastal waters could rise 10 to 15 feet above normally dry land.

The Weather Channel's hurricane specialist, Bryan Norcross said on Facebook, "In the FLORIDA KEYS, it is a full-scale hurricane emergency. Key West is probably going to get its worst storm in modern history, and perhaps ever. In SOUTHWEST FLORIDA – the NAPLES-FT. MYERS-CAPE CORAL area, the potential exists for the worst hurricane in history. The core of Hurricane Irma, potentially with winds gusting over 150 mph or more, is going to come close. Buildings in Southwest Florida are not, in general, built to withstand these winds."

The Hurricane Center has warned that the storm-surge warning issued for much of the South Florida and Central Florida coastlines, past Tampa on the west coast and Melbourne on the east coast - would bring the risk of "dangerous" and "life-threatening" inundation.

Officials have said that the threat was highest along Florida's southwest coast and in the Florida Keys - and here, the surge is expected to be "catastrophic."

On Saturday morning, winds were gusting over 60 mph and at least 25,000 homes lost power.

By mid-day, Irma was positioned 170 miles southeast of Key West, barreling to the west at 9 mph.

Later in the night, the storm is predicted to turn north and is expected to pass over the Keys and then up the west coast.

The National Hurricane Center warned the storm would bring "life-threatening wind impacts to much of the state."

The National Hurricane Center Acting Director Edward Rappaport said, "So while the trend to the west might be a little better for the east coast, it's actually much worse now for the Florida Keys and the west coast. They could see the most extreme of the winds and the storm surge."

Officials have said that about 5.6 million people in Florida, which comprises more than one quarter of the state's population, were ordered to evacuate and another 540,000 were told to leave the Georgia coast.

On Saturday morning, Florida Gov. Rick Scott reiterated the warning that time was running out for people in evacuation zones on Florida's west coast to get to safety.

He stated, "It's getting late ... if you're not on the road on the west coast by noon you need to get to a shelter...get off the road."

Late on Friday, President Donald Trump released a video message warning, "This is a storm of absolutely historic destructive potential."

He urged everyone in its path to heed evacuation orders.

Earlier this week, the hurricane killed at least 23 people as it passed through the Caribbean.