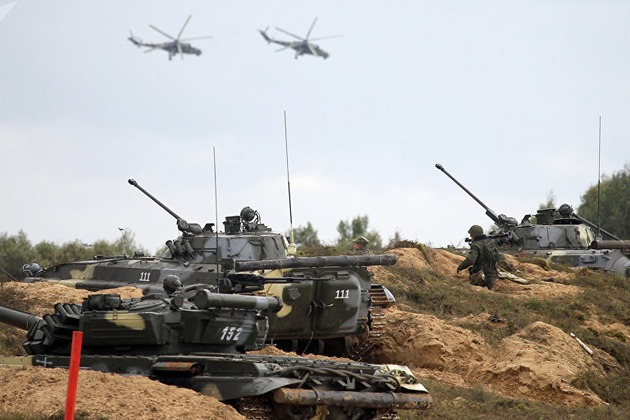 MOSCOW, Russia - The intensified war of words, that has broken out between the European council members and Russian authorities ahead of Russia's planned annual war games - now Germany attacked Moscow.

It, however, received a sharp retort from Russian officials on Saturday, who have said that the war games, along with Belarus was purely defensive in nature.

German Defence Minister Ursula von der Leyen said that the war games, code named Zapad or "West", were a clear "demonstration of capabilities and power of the Russians."

Von der Leyen told reporters at an EU defense ministers' meeting in Tallinn, "Anyone who doubts that only has to look at the high numbers of participating forces in the Zapad exercise: more than one hundred thousand."

However, lashing out at the minister, Russia's Defence Ministry not only criticized the comments made by Von der Leyen, saying it was bewildered by her assertion that Moscow planned to send more than 100,000 troops to war games on NATO's eastern flank this month.

Russia further rejected 'false allegations' that it might use the drills to train for invasions of Poland, Lithuania or Ukraine.

Russia's military said in a statement, "We are bewildered by the statements of Ursula von der Leyen, publicly talking through her hat and making arbitrary allegations about 100,000 Russian troops ...and about hidden threats to Europe."

The exercises scheduled to be held between September 14 and 20, in Belarus, the Baltic Sea, western Russia and Russia's exclave of Kaliningrad involves around 13,000 troops from Russia and Belarus.

Further, earlier statements from the ministry revealed that almost 700 pieces of military hardware will be used in the exercises.

On Thursday, General Valery Gerasimov, chief of Russia's general staff met with General Petr Pavel, chairman of the NATO military committee, to reassure him about the upcoming war games.

Russia's defense ministry said, "It is hard to imagine that Ursula von der Leyen's colleagues from NATO, other competent German ministries or her own subordinates deliberately misled her. It is much easier to suppose the opposite."

Russian Defense Ministry spokesman Major-General Igor Konashenkov pointed out that it was strange that the Germans would come up with such a figure, particularly considering that they had been told of the plans for the drills in advance.

Further, speaking to reporters on Saturday, Konashenkov said, "We are astonished by the statement made by Ms von der Leyen, the Germany's Federal Minister of Defence, publicly handling baseless figures that allegedly 100 thousand Russian troops engaged in the Zapad 2017 and threaten Europe."

The Major-General added in the statement, "The German side has timely received and does have comprehensive information of the concept, defensive nature and true figure of the Russian troops engaged in the Zapad 2017 exercise."

Russia has repeatedly pointed out that the scale of the exercise was in line with international rules and added that with less than 13,000 troops, international observation of the drills was not mandatory.

Meanwhile, speaking in Minsk late last month, the Belarussian Deputy Defence Minister Oleg Belokonev assured that any troops and equipment brought into Belarus for the war games would be withdrawn afterward.

NATO also believes this could be an excuse by Moscow to practice war in the areas.

Previously, Russia has used such exercises as a precursor or as a cover to project force in other countries such as Georgia and Ukraine.

Meanwhile, last month, the U.S. Army's top general in Europe, Lieutenant General Ben Hodges said that U.S. allies in eastern Europe and Ukraine were worried the exercises could be a "Trojan horse" aimed at leaving behind military equipment brought into Belarus.

The war games will simulate repelling an attack by extremist groups.