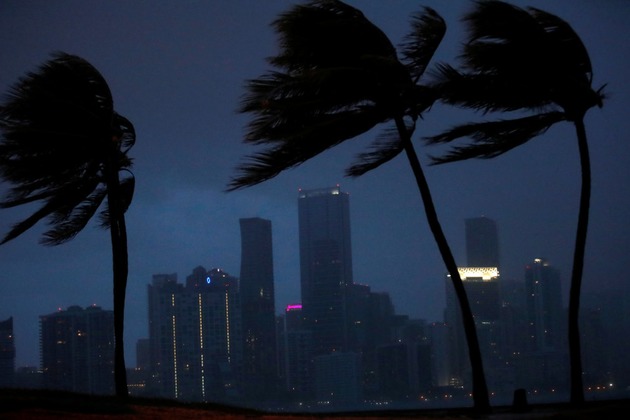 FLORIDA, U.S. - Feared to ravage the state with destruction not seen in a generation, Hurricane Irma, a dangerous Category 4 storm arrived in South Florida early on Sunday morning.

The National Weather Service said the storm made landfall at 9:10 a.m. on Cudjoe Key, with wind gusts reaching 130 mph.

After days of anxious preparations and several warnings to residents to evacuate, Irma's eye made landfall in Florida Keys, even though it spared Miami-Dade and Broward counties.

According to forecasters, the storm is expected to move northwest up Florida's Gulf Coast, and they are also warning about a second landfall later on Sunday as Irma heads north.

Officials also said on Sunday morning that storm surges could reach a devastating five to ten feet in the Keys.

So far, over a million households and businesses in South Florida have been hit by power outages, and dangerous flooding and tornadoes are expected.

Michael Brennan, a senior hurricane specialist at the National Hurricane Center, said in an early morning update, "A very dangerous day is unfolding in the Florida Keys and much of West Florida. It certainly could inundate the entire island. That's why everyone in the Keys was urged so strongly to evacuate."

Weather officials are also warning that Florida's east coast, that houses Miami and Fort Lauderdale, also remains in danger from winds and storm surges that could easily overwhelm some areas.

Addressing a news conference in Sarasota on Saturday, Scott warned yet again, "Once the storm starts, law enforcement cannot save you. This is a deadly storm and our state has never seen anything like it."

On Saturday, the National Hurricane Center had downgraded Irma to a Category 3 storm, however early on Sunday, the storm was upgraded again to Category 4.

On Sunday morning, at 5 a.m., weather officials said the storm was plodding northwest at about 8 miles per hour, placing it on pace to reach Naples by about 5 p.m.

However, weather forecasters said that its track would not make a different - as all of Florida is expected to experience damaging winds, rains, flooding and possibly tornadoes.

The National Weather Service has issued a tornado watch for all of southern Florida and the Florida Keys.

It also said southwestern Florida could see storm surges up to 15 feet if peak surge happens during high tide.

In some areas, as the storm ravaged

Even as the western part of the state faces a direct hit form Hurricane Irma, several people evacuated Miami and on Sunday

He said, "This is not a time for them to get out on the road and try to head back, this is a time for them to have confidence, hopefully, in where they are and just stay in place and ride it out. There really wasn't anywhere in Florida I could point to and say, if you go there you're not going to see the storm. It's going to cover all of Florida. I know people that went to Georgia that are now figuring out how to get out of Georgia because it's headed in that direction."

He said, "We're concerned about it intensifying as it heads into Southwest Florida, into Naples, Fort Myers, Sarasota, Tampa Bay. That has always been our biggest fear, a massive storm headed into that region pushing all that water in there plus the wind."

Meanwhile, other areas that took the full blow of the dangerous storm saw transformer blowing up with loud bangs and suffered from the widespread power outages.

About 70 more shelters remained open across the state on Saturday evening and several  cities imposed curfews.

Governor Scott said, at least 50,000 people are staying in 260 state shelters as he implored nurses to volunteer throughout Florida.

Meanwhile, early on Sunday, reports emerged about thousands of people being wrapped around the massive Germain Arena in

Estero, on the west coast of Florida which was opened as a shelter on Saturday.

Further, about 15,000 people had filled in the Collier County emergency operations center in Naples, officials said.

Meanwhile, Fire Chief Dave Downey who was at the Miami-Dade Emergency Operations Center said that after the storm passes, his teams will deploy to the Florida Keys and to southwest Florida to assist with rescue efforts.

Downey also said that he feared that the storm could knock out the Overseas Highway, which would hamper rescue efforts as his department's helicopters too had been moved ahead of the storm to Orlando, to keep them from being damaged.

Officials are said to be dealing with concerns that wind gusts will send water over the Herbert Hoover Dike that holds back Lake Okeechobee, which covers more than 700 square miles.

So far, 22 people have been killed by Irma, that left some Caribbean islands completely destroyed after it tore across the region early on Wednesday.

According to Michael Joseph, president of the Red Cross in Antigua and Barbuda - Barbuda is "uninhabitable" and in a "total blackout" with almost all of its infrastructure wiped out.

Local, state and federal officials have offered ominous warnings and the Federal Emergency Management Agency has urged people from Alabama to North Carolina to monitor and prepare for the storm.

About 540,000 people in Georgia and 44,000 in South Carolina had also been ordered evacuated by Sunday evening.