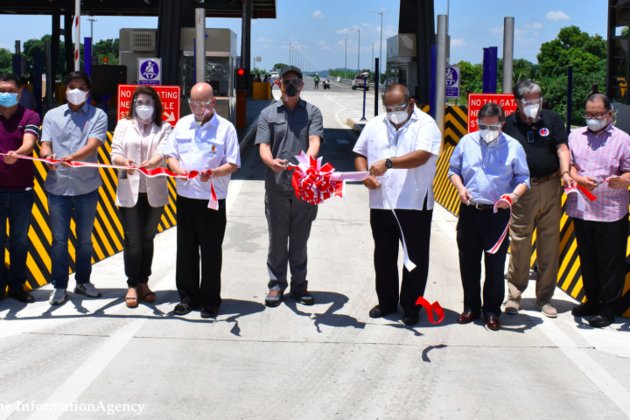 This is the last phase which completes the four-lane 89-kilometer toll road under the "Build, Build, Build" Program of the national government led by the Department of Public Works and Highways (DPWH), and in partnership with San Miguel Corporation (SMC).

Dizon also serves as the deputy chief implementer of the government's COVID-19 response.

With this project completion, Manila to La Union travel time is shortened to three hours, while bound for Baguio from the metro will only take three and a half hours.

FULLY COMPLETED TPLEX: The opening program during the inauguration the last phase of the Tarlac-Pangasinan-La Union Expressway held on July 15 at the Rosario exit (CGRC/PIA La Union)

TPLEX is expected to be a vital instrument in bringing back tourism and trade in the Central and Northern parts of Luzon.

"It would also help boost economic development especially now that we are recovering from the impact of the pandemic," Dizon added.

Representing President Rodrigo Roa Duterte during the inauguration was Executive Secretary Salvador Medialdea who stated, "I assure you that infrastructure projects under the 'Build, Build, Build' remains as one of the most efficient and effective means to revive the economy during this health crisis."

"This clearly shows that the strong partnership of the government and the private sector is instrumental in achieving our national development goals especially today that we are facing challenges," he said.

Meanwhile, rapid testing was done among all the guests including media entities to ensure public health and safety during the conduct of the event.