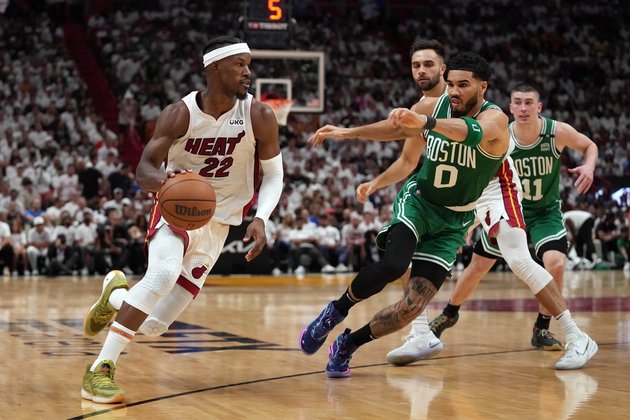 Game 1 hero Jimmy Butler isn't much for rating his performance or basking in the achievement, even when topping the 40-point mark.

However, Butler will be out to match a stellar all-around effort in Game 2 of the Eastern Conference finals Thursday night when his Miami Heat host the Boston Celtics.

It was Butler's fifth 40-point performance in the playoffs during his three seasons with the Heat -- only franchise icon Dwyane Wade (seven) has more -- but he downplayed talk that he stepped up to meet the moment.

Boston didn't know how to stop him, especially when Butler scored 17 points in the third quarter that began with a 22-2 Miami run and closed with a 17-3 burst.

The Celtics' 62-54 halftime lead evaporated and the team trailed 93-76 entering the final stanza.

"He's comfortable," Brown said. "He's very comfortable right now, and we've got to do a better job of breaking that rhythm that he's in. That's it. We've got to take the challenge."

Brown pointed out that it was "uncharacteristic" of the Celtics to allow 118 points.

Part of the problem was NBA Defensive Player of the Year Marcus Smart (right foot) sat out the contest and big man Al Horford (COVID-19 protocol) was a late scratch. Smart is hopeful of a return Thursday night while Horford realistically could return for Saturday's Game 3 in Boston.

While the loss of Smart and Horford hurt, the Celtics unraveled in the third quarter when they were outscored 39-14 and made just 2 of 15 field-goal attempts with eight turnovers.

Boston star Jayson Tatum committed six of his seven turnovers in the stanza.

"I'll be the first one to say I'll take the blame for that," Tatum said. "I've got to lead better. I've got to play better, especially in those moments. I'm just looking forward to responding next game."

"It's not an issue. Players can make mistakes," Pritchard said. "We'll come back next game, be ready for it. We'll make adjustments and be ready to go."

With Boston surely gearing adjustments toward slowing Butler, the Heat will be aiming to give their star some help in Game 2. Tyler Herro scored 18 points off the bench and unheralded starter Gabe Vincent added 17 points. No other Heat player scored more than 11.

Of course, Butler has three 40-point outings this postseason so perhaps a Game 2 repeat is possible.

"You can't expect him to get 40," veteran forward P.J. Tucker said. "He's consistently being aggressive, whether he's making shots, missing shots, whatever the case is, and that puts everybody else in position to be able to rebound and get open shots with people helping and him making plays for everybody else. It lifts the level of our team and it lifts the play of everybody."

Heat coach Erik Spoelstra won't be surprised if there is another Butler splurge in Game 2.

"Jimmy Butler is an elite competitor," Spoelstra said. "There are a lot of guys in this league playing basketball; he's competing to win. That's a totally different thing, and he does that as well as anybody in this league."

Miami hopes to have point guard Kyle Lowry (left hamstring) in Game 2. He has missed seven of the past nine games.