Rays score twice in 11th to get by Guardians 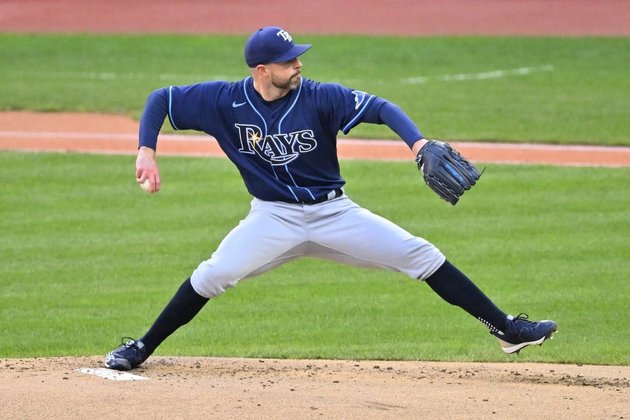 Harold Ramirez grounded a tiebreaking, two-out double in the 11th inning to carry the visiting Tampa Bay Rays to a 6-5 win over the Cleveland Guardians on Tuesday night.

Ramirez, who was 2-for-5 with two doubles and three RBIs, ripped a ball off Trevor Stephan (6-5) for the Rays' first hit since the fourth inning.

Javy Guerra (2-0) pitched a scoreless 10th, and Calvin Faucher followed to earn his first career save for Tampa Bay (85-69).

Cleveland relievers retired 21 consecutive hitters from the fourth to the 11th, but the Guardians (86-68) lost for the first time in eight games.

A two-time Cy Young Award winner during a nine-year career with Cleveland, Corey Kluber was pitching as a visitor for the first time. He allowed three runs on eight hits over four innings.

Cleveland's Steven Kwan went 3-for-5 with a walk, two runs and an RBI, and Jose Ramirez was 3-for-6 with a triple and two RBIs. Amed Rosario, Will Brennan and Oscar Gonzalez each produced two hits.

A 23-minute rain delay in the top of the third inning wasn't enough to keep Kluber or Bieber from returning to the mound, though the Tampa Bay hurler went 35 minutes between pitches with his team batting as the rain let loose.

The Guardians got a run off Kluber in the third. With two outs and Kwan on first, Jose Ramirez lashed a deep drive that hit the right-field wall just out of the reach of a leaping Manuel Margot. It was Ramirez's fifth triple of the season.

The Rays put together a big fourth, as Franco and Harold Ramirez ripped consecutive doubles to open it. With the infield in, David Peralta produced an RBI groundout.

On a cutter from Bieber, Siri lifted a two-run homer to left-center to give Tampa Bay a 4-1 lead.

Gabriel Arias and Kwan answered with RBI singles in the home half.

Myles Straw tied the game 4-4 in the eighth with a two-out infield single.