Our Domains Your SEO aka ODYS ventures with Craig Campbell SEO 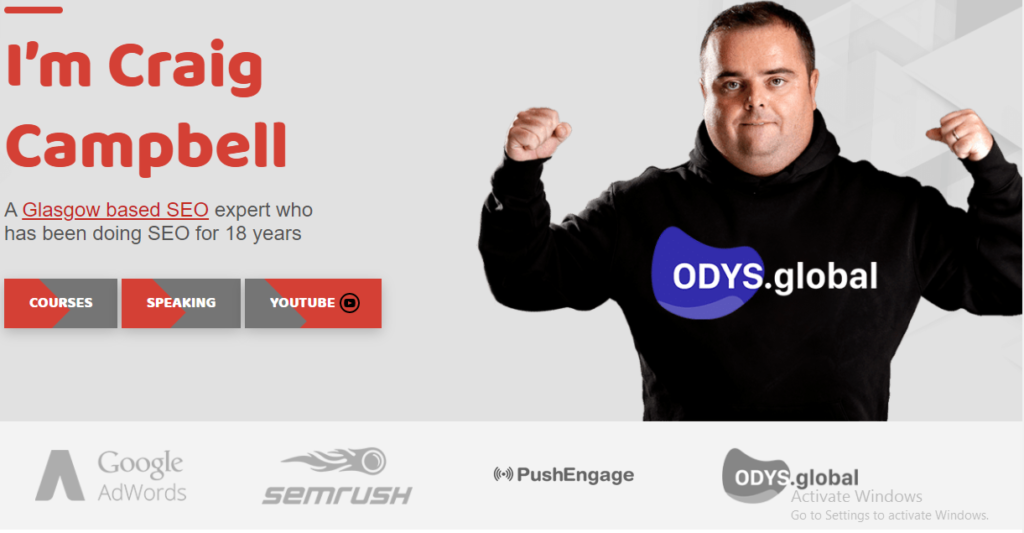 Craig Campbell, the Glaswegian Search Engine Optimization expert, and Youtuber has reportedly sealed a deal with ODYS Global which is said to be in six-digit Craig Campbell's YouTube channel.

Craig Campbell SEO has devoted two decades to the digital marketing industry. He specializes in field's link building, PPC management, online reputation management, etc. The voguish SEO expert entered the world of youtubing in 2017 as Craig Campbell SEO channel. He has been posting videos to his channel since then. At the beginning of the outbreak period of COVID-19, Craig Campbell started releasing a series of videos to give in-depth digital marketing knowledge on his channel for free. The idea helped him in multiplying his subscribers. As per the current data, Craig Campbell has garnered over 45,000 followers in the period of six months.

Craig Campbell has locked a sponsorship deal with ODYS Global. He spoke to news daily and shared his excitement about it. For nescient, ODYS Global is an internet marketing company that deals in premium domains. The company's name stands for: Our Domains Your SEO offers premium domains along with SEO services. The company is for specific clientele those who are looking for high ranks on Google search engine right away. The process of the company works on authentic grounds as they offer older domains (only ones the Google prefers) tagged with thousands of prior backlinks in customized industries that includes affiliate marketing. They also offer template sites that will convert accordingly. The partnerships between ODYS and Craig Campbell have brought together the two powerhouses of the SEO industry.

Craig Campbell believes that sponsorship deal with ODYS Global is the result of his relentless devotion to his youtube channel. The channel helped him in garnering great contacts in the industry. He sees that by producing massive video contents from 2017 not to forget his regular podcast episodes, blog posts, and social media profiles added endless value to his name and thus consequently the viewership. According to many digital marketing experts, that's the key to SEO success. Craig Campbell disclosed that in his 18 years career he has developed only because he has worked on himself and aimed to keep ahead of the competition. He recognizes the YouTube channel as his passion project. He said that it was an SEO strategy to add the brand value to his name. Craig Campbell explained that the Youtube channel got him hefty traffic and undying exposure. Alongside, he is enjoying affiliate sales and that has led him onto other business consultancy and deals.

In the end, Craig Campbell looks forward to inspiring the aspiring SEO to learn from his success story and never give up on their dreams. By continuous labor and work hard one can garner viewers that would stick around for long. Craig Campbell has managed to swim off the economic crunch and thrive during the same. And Craig Campbell says if you dream, you can achieve.

Learn how to use SEO and become an expert for free on his YouTube Podcast at Youtube.

King could step in if Malaysia parliament cannot choose leader

KUALA LUMPUR, Malaysia: As support for a conservative Islamic alliance prevented major coalitions from winning a simple majority in its ...

BUFFALO, New York: Just ahead of the busy Thanksgiving holiday week, western New York state was hit by a snowstorm, ...

After 73 years, Biden tells Palestinians to wait until conditions are right

NEW YORK CITY: Granting Palestine full state membership status at the UN would be a "practical" step that could preserve ...

WASHINGTON D.C.: In the largest dam removal undertaking in U.S. history, a U.S. agency last week approved the decommissioning of ...

WASHINGTON D.C.: The U.S. is banning the importation of all communications equipment made by Chinese companies Huawei and ZTE, citing ...

WARREN, Ohio: Next month, workers at a General Motors-LG Energy battery cell manufacturing plant in Ohio will decide whether to ...

ACCRA, Ghana: Ghana's Vice-President, Mahamudu Bawumia, said on Facebook this week that due to dwindling foreign currency reserves, the country's ...