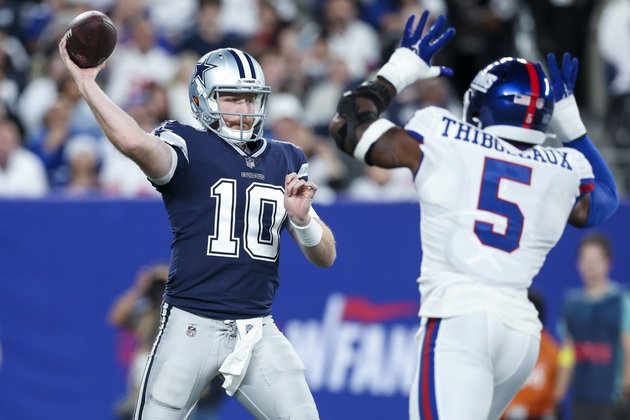 When quarterback Dak Prescott broke his thumb during a Week 1 loss to Tampa Bay, many presumed it was an early death knell to the Dallas Cowboys' season.

Cooper Rush and the rest of Prescott's teammates apparently didn't get the memo informing them that the final 16 games were merely a formality.Rush has played impressively in wins over the AFC champion Cincinnati Bengals and the New York Giants, meaning Dallas is 2-1 and more than viable in a wide-open NFC.

Rush and the Cowboys aim to make it three straight Sunday when they host the struggling Washington Commanders in Arlington, Texas in an NFC East battle.

In Monday night's 23-16 win over the Giants in the Meadowlands, Rush cooly went 21 of 31 for 215 yards, tossing a fourth quarter touchdown pass to CeeDee Lamb to give Dallas the lead for good. Rush committed no turnovers in a hostile road environment.

About his only slip-up came immediately after the game. Rush jogged right off the field and had to be brought back by Prescott and public relations man Tad Carper to talk with the ESPN crew.

Rush, who in his first NFL start last year led a fourth quarter comeback that gave the Cowboys a road win over Minnesota, hasn't lit up the scoreboard. He's thrown for 514 yards and averaged just under 11 yards per completion.

Prescott might be more than a week away as he indicated on Monday. McCarthy said Wednesday that swelling remains an issue for Prescott, and there was not yet a timetable for his return. Prescott told reporters in New York on Monday night that he hoped to play Week 5.

But the most important numbers for Rush and Dallas are these: Two and zero. Two wins that Dallas really needed and zero turnovers. With the Cowboys playing a good brand of defense, Rush doesn't have to be Prescott. He just has to do what he's done.

And that might be good enough again this week, considering the frightful difficulties Washington (1-2) experienced in last week's 24-8 loss to Philadelphia when asked to protect quarterback Carson Wentz.

The Commanders allowed a whopping six sacks in the first half and seven for the day. At one point in the third quarter, the Eagles held a preposterous 323-(-1) advantage in passing yards, since the NFL counts sack yardage as part of the passing game.

Wentz was able to throw for 211 yards and lead a late touchdown drive, but none of it mattered. It added up to a second straight dispiriting loss for Washington after rallying in the fourth quarter to stop Jacksonville in Week 1.

"We just gotta execute better," said Commanders receiver Curtis Samuel. "I feel like just attention to detail, you know. Everybody's got to do their job and do it well. And that'll help us score points."

The good news for Washington is that Wentz has a history of success against Dallas. In eight career starts against the Cowboys, Wentz has 14 touchdowns and just four interceptions. His career passer rating against Dallas is a solid 95.7.

The bad news for the Commanders is they may have to deal with one more offensive weapon for the Cowboys. Trends indicate that wide receiver Michael Gallup (knee), a full participant in Wednesday's practice, should be able to make his season debut.

"MG's back. That's exactly what I said. MG's back," Gallup said after practice.