Lightning confident ahead of visit to Sabres 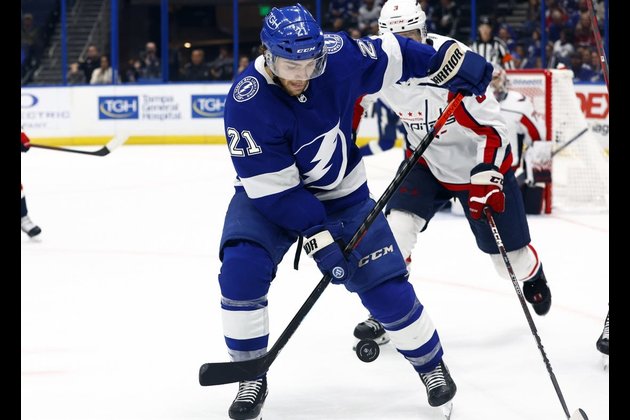 Winners in five of six games over a productive two weeks, the Tampa Bay Lightning are set to open a three-game road trip through the Eastern Conference, starting with Monday's matchup against the Buffalo Sabres.

It is the first game of a back-to-back for the Lightning, who then have a road game against the Boston Bruins on Tuesday.

Brayden Point, the Lightning's sparkplug who plays the bumper spot in on the team's No. 1 power-play unit, appears to have rediscovered his form and turned in a strong game Friday against the St. Louis Blues.

The 26-year-old Calgary native scored twice and added an assist for his first three-point performance of the season in a 5-2 victory over the Blues. It marked his second two-goal game, also getting one Oct. 21 against the Florida Panthers when he also had the game-winning tally in overtime.

Appearing in all 20 Lightning games, Point has 21 points (eight goals and 13 assists), two game-winning goals and a 14.0 shooting percentage, which is the lowest of his seven seasons.

"We're starting to jell a little bit more, I think," Point said. "Plays are becoming cleaner, we're breaking out cleaner, pucks are hitting tape and guys are feeling more confident. The execution of the game plan has been much better."

Nikita Kucherov posted three assists in the victory over St. Louis. Kucherov has 21 assists to go along with 10 goals.

Said Point: "He's world class. I don't know if I get amazed anymore. It's funny, you almost come to expect it with him, but they are incredible plays."

Lightning forward Rudolfs Balcers (upper body), acquired Nov. 12 from Florida on waivers, is doubtful for the road trip after a hard hit into the boards against the Blues.

The Sabres lost their first encounter with Tampa Bay 5-3 on Nov. 5 in their second game in two days. Zemgus Girgensons, Casey Mittelstadt and Jeff Skinner scored for Buffalo, but Kucherov had a four-point outing (goal, three assists) for the Lightning and Brandon Hagel had a goal with two assists.

Buffalo coach Don Granato said the team will need to step up after their 3-1 loss at home against the New Jersey Devils on Friday.

Just 2-9-0 in its past 11 games, Buffalo received a strong performance Friday from goaltender Craig Anderson, who stopped 41 shots.

"The way (New Jersey) played, you could've gotten run out of the building; any team could've tonight," said Granato. "They're a team that's feeling it right now, and I give our guys credit. (Anderson) was great; he looked like an experienced No. 1 goaltender there many times.

"I know our guys didn't feel it; I could tell by the way they did things the very first shift, just the way they went back for the puck and what they did with it. It was like, 'We might be in for one right now.'"

The Sabres did get back forward Kyle Okposo against the Devils. Sidelined six games with a lower-body injury, the captain downplayed the injury.

"Just some wear and tear I've been dealing with and had to give it some time to calm down," the 34-year-old Okposo said.